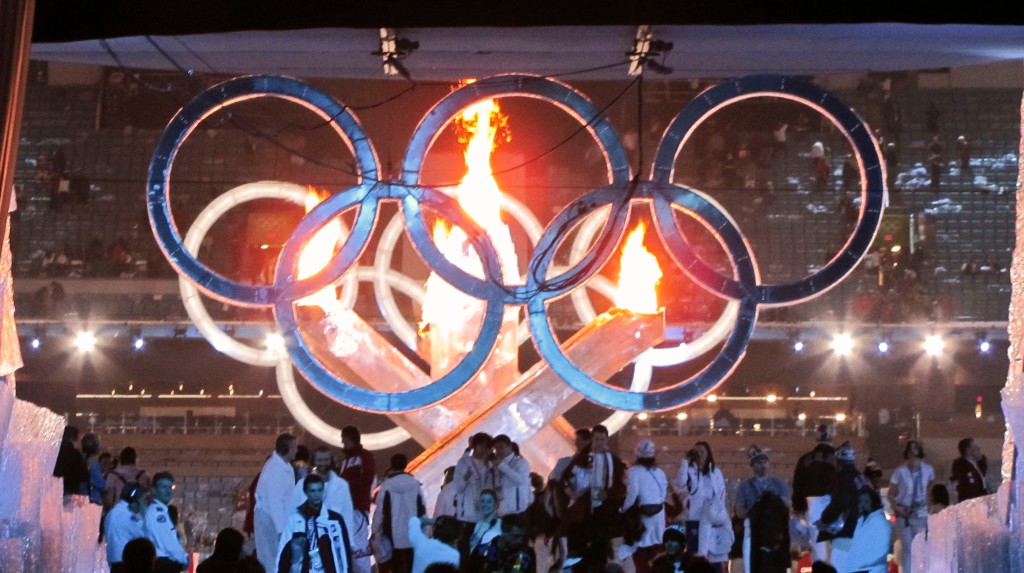 It’s about time.  In light of the London Summer Olympic Games, I just had to do this.  It’s been on my mind unlike anything else these past few weeks.  I tried to hide it at first – there’s a lot of pressure to write as an Olympian, to write as a “known” person (though I hardly consider myself “known” by any means) – but I’ve decided to succumb and write a bit about my Olympic experience.

I was a member of Team USA at the 2010 Winter Olympic Games in Vancouver, Canada.  To be precise, I was an ice dancer (one of the disciplines of figure skating – that description/differentiation is a story for another time) with my partner, Evan Bates.  We qualified for the Olympics at the US Championships in January, and just a couple short weeks later were on a flight to Vancouver for Team Processing (where we receive all our apparel for the Games).

The Olympics themselves were such an incredible event – it’s nearly impossible to put it into words!  It’s still so surreal that I actually went and was there, let alone competed in them.  The fact that there are so many athletes who attend, from such a variety of countries (82, to be precise) and sports (86 different events), just makes it an amazing event unlike any other.  I made countless friends, though I think the entire time I was there I still didn’t meet all of the 216 Team USA athletes.  I can only imagine how much more difficult it would be during the Summer Games!

My personal experience, from a competitive and athletic perspective, was interesting.  I experienced some of the highest highs and lowest lows of my skating career, but it also felt like a normal competition.  The Opening Ceremonies were indescribable – it was there that it finally hit home that I was there, at the Olympics!  However, just a few days later I’d find myself in my room in the Olympic Village in tears because a practice didn’t go well.  And then – a week or so later – Evan and I would be skating off the ice after skating a fantastic free dance, and he’d turn me around saying, “Look at that.  Soak it all in.  We just did that!” reminding me to really ingrain every moment in my brain. Meanwhile, practices were the same as always: don’t forget make-up, skates, music, outfits; practice all the pieces of your program; make sure you stretch afterwards.  Even competition felt the same, with my nerves not even exceeding that of Nationals just a month earlier.

Overall, the Games were an experience I will never forget.  Today, watching the Summer Games, it brings back beautiful memories, but also a bit of despair; it’s very bittersweet.  I desperately hope to go back to the Olympics again – it is a goal I will probably hold on to forever.  However, I know my chances are slim (and I’m not just being pessimistic, I’m being realistic) as I need to first find a new partner, we need to train intensely, and we need to hope and pray we can bypass all of the politics and ‘paying of dues’ that often occurs in figure skating.  It takes awhile to become adjusted to a new partner, which also poses a slight problem.  It’s not impossible, just highly improbable.  Therefore, the post-Olympic depression of which I’d been forewarned is finally hitting.

I promise I’m not making this up!  There’s even been a study conducted on former Olympians proving this.  For me, I always had the 2014 Games in Sochi to which I could look forward, but now… there’s nothing.  I still loved watching the Games – cheering on the athletes not only from the US but from all countries as they lived their Olympic dreams – yet I can’t help but feel melancholic knowing I may never be back there again.  There is nothing like the high of being at the Olympic Games… no other event I’ve ever lived has been comparable to it yet!  It was so extraordinary in so many ways, and I will never forget my experience there.

That being said, I wish I’d soaked it all up a bit more.  I don’t have nearly the pictures I should, nor as complete of journal entries as I’d hoped to have written.  My advice to all future Olympians would be: When that time comes, and you have qualified to meet your dream, live every moment of it and document it as well!  Leave it with no regrets – even if you don’t perform well, at least do the best you can at that moment.  Take every opportunity given to you (within reason, of course).  And absorb it like a sponge, because you never know if it will be your last or not.

I am honored that I was able to represent the United States of America in the Olympic Games.  Both my federation, US Figure Skating, and the International Olympic Committee helped me live an experience I had never thought possible, and for that I am truly grateful.  It is one I will forever remember, reminisce about, and reach towards.

P.S.  The picture above is one I took upon leaving Opening Ceremonies, with the Olympic Torch shining through the Rings.  I just had to get one more look (and one more picture) as I was walking out!  (It was also before I really knew how to work my camera, hence the slightly blurry image.)

P.P.S.  All symbols, mascots, emblems, etc. are property of the International Olympic Committee.  The Olympic Charter can be read here.  Thank you